Politics has a clear definition. However, the journey to political power, has no formula. For this reason, it is appropriate for a political party to always measure the grounds and to act in accordance with the voices of the masses. The transfer of power from one party to the other, is a process that is set in motion by the people of any state and for that matter, they must always be accorded that respect and included in any decision to be taken by any political party.

Today, Ghana is witnessing some very interesting governance system. I classify it as interesting because the things we are seeing being exhibited by government appointees and officials, have never been seen before. At least, not under a year after assuming power.

The little political dissatisfaction we witnessed in Ghana openly was at the time the election petition was underway. At the time, those from the New Patriotic Party (NPP) and especially its supporters felt the then administration headed by His Excellency John Dramani Mahama, was illegitimate, hence, the show of some form of acrimony among some people. What we are seeing today is completely different.

I have watched some video footages on social media of attitudes by government officials under His Excellency Akufo-Addo and the reactions of his appointees to ordinary Ghanaians on the streets, and I am tempted to conclude that the end of his administration is near and handy.

Most often, these acrimonies and hostilities as well as dissatisfactions are shown around the last year of a second term of any government, at least, within the Ghanaian context. That we have begun seeing these things showing their heads and faces at these early hours of the administration, the National Democratic Congress (NDC) must see an opportunity lying near its grasp.

We witnessed, in 2016, a campaign waged on a strategy that misled the people of Ghana into truncating a government that was focused and delivering on its promises to the people, and replacing it with a government that has shown a clear lack of focus and lack of preparedness for power.

Taking a critical dive into some of these claims, the NPP, then in opposition, joined Ghanaians at the ports to complain about cost of clearing their goods imported into the country. Today, clearance of a container that was at a cost of about GH¢30,000 is now clearing for over GH¢70,000 a clear indication that Ghanaians replaced what they thought was bad to worse. Today, prices of fuel are at a rate never witnessed before. On 13th of September, 2017, at the Kaneshie Pamprom Traffic Light Goil filling station, I took a picture of the prices displayed on the screens which stood at Gh¢4.130 per litre. On the morning of putting this article together, Sunday 24th September, 2017, on the same screens at the same location, a litre of petrol displayed was Gh¢4.430, an indication that fuel prices in about 11 days had gone up by over 30Gp. Today, fuel prices are higher than they were ever sold in the last 8 years of the Mills and Mahama administrations.

If we were told, by the current minister in charge of energy, that the sale of a gallon of fuel for GH¢15 was high and a drain on Ghanaians, what would the sale of a gallon of fuel, same quantity, at a cost of about GH¢22, be on the same Ghanaians? Is it the case then that for the sake of power, we must lie to power when we know clearly that we could do nothing about it even if we were those in power? 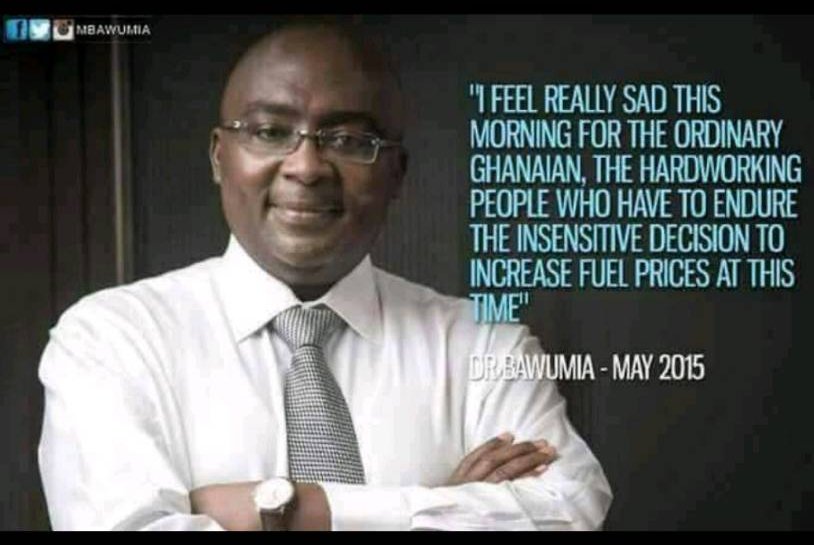 Today, the NPP, a party that claimed some taxes on goods and services were nuisance, causing increases in prices of commodities, the removal of which would bid prices down, has proceeds to remove some of these taxes, yet, prices of goods and services are higher than when those supposed nuisance taxes were on. Is it a matter of deception? Or a clear case of massaging figures to be seen to have done something when in reality, nothing was done?

Before the 2016 elections, the NPP presented the then administration and its officials as living profligate lives. In their campaign, they made it appear that they would cut down on expenditure of appointees and channel the resources towards alleviating the plight of the masses. Upon assumption of power, the first step in ‘cutting cost’ by the president, Mr. Akufo-Addo was to increase the list of ministers from some 86 to 110. Obviously, with the increase of salaries of public office holders, that cost could not be classified as cutting expenditures on governance in relation to remuneration of government officials.

Ghanaians have had to suffer to buy new Land Cruisers for these appointees, provide accommodation or pay their cost of rents, provide for house helps and what have you. Indeed, notwithstanding the claims of the government that no new V8s be ordered for government officials, we are all witnesses to newly registered (-17 plated) V8s packed in the ministries for government officials, an indication that brand new vehicles are being procured contrary to the public directive by the president.

Contrary to promises to protect the public purse, the president of the Republic, Mr. Akufo-Addo, has been accused of flying 197 delegates to the United Nations General Assembly this year, 2017. What must be noted is that these individuals cannot be all present in the Assembly when in session. The over 190 would have been kept in hotels and catered for, with per diem paid them upon return. This cannot be a means of protecting public purse.

Today, from videos in Ghana and abroad, Ghanaians are hooting at government officials on their streets. These official, have been seen responding in hostile manners to their own citizens who are complaining of their profligacy.

Politics is about the thinking and perceptions of the ordinary man on the streets. They see and feel whatever is happening at the seat of government. Their discussions form the general opinion of the public and feeds into a perception which eventually leads to a decision on the government by citizens.

These are all becoming public because it is clear that the most ardent supporters of the change in 2016 have become disappointed. The chanting to improve social services, the promises to improve education, health, electricity, among other things, have been betrayed.

Today, a government that promised to make secondary education free, has rather adopted a scholarship scheme for first year students. The hopes of those who voted for the promise of free because it was promised to be wholesale, and whose children are in second and third years, have been thrown to the dogs.

Today, a government that promised to restore allowances for nursing training colleges, has reintroduced a quota system restricting these institutions from admitting students to their full capacity because the government cannot pay them the allowances if they were to admit in their full capacity. This also dashes the hopes of thousands who otherwise, under the previous schemes, would have gained admissions to train as nurses.

Today, a government that has promised to restore allowances for teacher trainees, has rather redirected same students, upon assumption of power, to register with the Students Loan Trust to pick their ‘allowances’ through that scheme. You may want to wonder how a loan scheme could be made to pay allowances to students.

Today, Ghanaians who have been promised a reduction in their bills are seeing rising bills on their tables each month. Indeed, it was the president, then opposition leader, who stated emphatically that utility bills and with emphasis of electricity, was more than the cost of rent. Today, it is not different. One is tempted to say that electricity bills today, aside costing more than rent, has swallowed the cost of chop money and savings of families.

Today, the people who were promised tax cuts are paying taxes higher than they were paying in the past. Prices of goods and services are higher than they where by close of 7th January, 2017 the very day of handing over the mantle of power to Mr. Akufo-Addo.

Today, the politics of ownership has taken over the need to serve the people with an open heart. Today, the government is engaged in a fight to restore history of its ancestors instead of working to alleviate the ailing conditions of the people. Today, the government has only one ear, an ear that is only opened to the challenges of its families and friends. Today, one must be known by a certain name to be appointed to work.

The situation today, is worse than what it used to be. It is obvious, from the actions and responses witnessed in the public, that the government has already lost touch of the needs of the people. The grounds are fertile than ever before for power to be taken off the hands of the NPP in 2020. 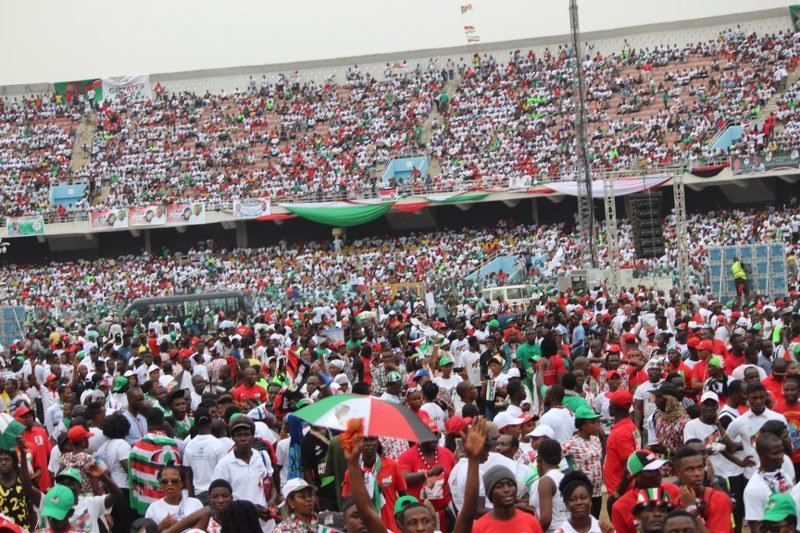 However, this cannot happen in a vacuum. The difficulties are that by the end of the 2012 elections, the NPP was aware than Mr. Akufo-Addo was returning for 2016. A critical observation would reveal that anyone who had constant space in the media to engage on behalf of the NPP, was doing so with the overall interest of Mr. Akufo-Addo and his chances to lead the NPP in the 2016 elections.

On the contrary, as of today, the NDC cannot claim same. It is not clear who leads the party into 2020. Today, even voluntary organizations within the party are likely to be met with suspicions as to who is/are sponsoring the group. No party can win power with such posturing. Volunteerism must be encouraged under this dispensation. People who appear effective must be called under the umbrella and empowered to work for the victory that is in sight.

The NDC can hasten the truncation of an 8-year term because the signs are clear on the wall. If the party can resonate with the masses and stand with their needs, the records before the 2016 elections, and the obvious betrayal of trust by the NPP, would play to the advantage of the party and result in a victory come 2020. The party must reorganize and present a candidate that stands a greater change of wrestling power from the government of the day.

3 thoughts on “CAN THE NDC GET ITS ACTS TOGETHER AS 2020 REMAIN POSSIBLE?”