It is now obvious that our president who was then a member of the Convention People’s Party (CPP), but whose fathers were working hard to overthrow Kwame Nkrumah of the CPP, did not really understand what Kwame Nkrumah was doing at the time.

The over 400 Factories established by Kwame Nkrumah in his attempt to industrialize Ghana, is not the type he Akufo-Addo is doing today.

Today, Akufo-Addo has launched a factory in the Central Region as his first of the One District One Factory policy. The place has been taken over by weeds as we speak. The pomp and pageantry that it came with is a clear departure from the reality that the people of Ghana and especially those in the area expected of the project as of today.

As of today, no one knows which factory is coming up next and what policy document is guiding it. Prior to 7th December, there were those who demanded concrete blueprints that would specify the exact implementation plan that Ghanaians must expect should the NPP win the elections. No one who demanded this simple exercise was spared an insult from the NPP. The reality is that today, we are all lost on what the government is doing. We do not have any document that we can use as proof to demand accountability from the government. It is sad to realize that citizens would prefer being governed by an administration that is not willing to put out its plans that would give the opportunity for them to examine the implications of its actions. 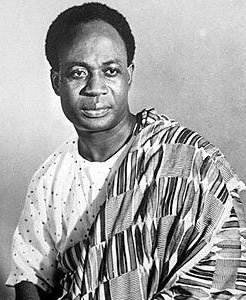 If you go through the archives, over 60 years ago, between 1951 and 1966 when Kwame Nkrumah began playing a role in government, nothing was done without a blueprint. Indeed, there were development plans all over.

The latest is the SEVEN YEAR DEVELOPMENT PLAN which Kwame Nkrumah was implementing before his overthrown some two years into the implementation of the plan.

Kwame Nkrumah knew his industrialization plan would need energy. So he went to build the Akosombo Dam. He proceeded to add other barges to guarantee power supply. Indeed, the Bui Dam was captured in the Seven Year Development Plan to ensure power sufficiency.

The construction of the Tema Harbor (a revenue hub for Ghana today) and the entire Tema Township, the construction of Accra-Tema Motorway to ease transport of goods, the building of Kumasi Shoe Factory in Kumasi closer to the Northern Region where a cattle ranch was located, was not without plan.

The siting of Aboso Glass Factory near its raw materials. The Sugar Factories, the Rice Factories, were all sited in areas with government control and not what we are seeing under Akufo-Addo today under the so called One District One Factory scheme. Factories were distributed across the country based on availability of materials, accessibility, among others.

The policy of having state farms throughout and the employment opportunities provided to graduates, was not without a plan.

The plan to completely irrigate the Accra Plains which found its way into the Kufour’s administration of which Akufo-Addo was a member but which never saw the light of day, was birthed in the 1963 Development Plan.

In the Seven Year Development Plan, every Ghanaian child was to enjoy free education up to the tertiary level. We are struggling under Akufo-Addo today to get money to even provide adequate dormitories, dining halls, dining tables, classroom chairs, and adequate meals for students at Senior High levels.

What Mr. Akufo-Addo would do well to tell Ghanaians is that the mistakes of the Kwame Nkrumah’s industrialization policy began after his overthrow.

The 1966 coup which ushered in the fathers of Akufo-Addo, saw the over 400 industries placed in the hands of an incompetent bunch.

Nepotism took over nationalism. Before the overthrow of Kwame Nkrumah, several Ghanaians were sent abroad to Russia, America, China, among others, to learn and obtain managerial, technical, and scientific skills. All these people were to return and manage these Factories for the future projected Ghana.

Soon after the 1966 coup, the new administration issued a directive which made these experts to begin finding their feet in their various locations. There was no motivation for their return. All the Factories were placed in the hands of family members, friends, business associates, financiers among others, of the then administration run by the fathers of Mr. Akufo-Addo.

No professional search was made to ensure competence in the management of these industries. Soon after, there came the infamous Apollo 568 which was a directive from the administration that all managers and directors who were managing these industries and factories under Nkrumah were to vacate posts. This resulted in the sacking of some 568 Managers and Chief Directors who were effectively managing these vibrant industries.

After the takeover, these industries were run to the ground. They were incompetently run by the friends of government who did not have the skills to manage them. Some were sold out and today, here we are.

This is what the president must describe as the mistakes of the industrialization agenda of Kwame Nkrumah. The fact remain that at the time Kwame Nkrumah was in charge of Ghana, all these factories were running effectively. None was collapsed under him. It would be completely out of place for the president to present the slightest idea that the industries and factories were instituted without any plan.

For an attempt to present the industrialization vision of Kwame Nkrumah as a mistake, I would want to lead the crusade for Akufo-Addo to make available his policy plan for industrialization for all of us to read and see how he intends to correct such mistakes.

Mr. President, the rhetorics are just one too many and we are tired. We all wish you well, but you must note that your success as president does not come in running down an icon. Kwame Nkrumah is not the politician of today. Indeed, the struggles of Kwame were those that made Ghana an independent state for which you are a president. But for the efforts of Kwame Nkrumah, you would not be president. That alone is an effort that require commendations from you. If you will not praise the man Kwame Nkrumah who is celebrated worldwide, please, spare his name and allow him to rest in his grave peacefully.

Any fight to run down Kwame Nkrumah, would not go without response to you. As young as some of us are, the history of Ghana has not been lost on us, and we shall at all times, once we have life, rise to tell the world what it must know. And to our young ones, we shall stand to tell them the truth so they are not misled. Thank you.

20 thoughts on “RESPONSE TO MR. AKUFO-ADDO ON HIS RECENT STATEMENT “I WON’T REPEAT NKRUMAH’S INDUSTRIALIZATION MISTAKES””