Two rather important issues occupied the media space of Ghana over the past week. One had to do with the Corruption Perception Index released by the Transparency International and the other, the conviction by the courts, of the former Head of Ghana Youth Employment and Entrepreneurial Development Agency (GYEEDA). All of these issues bother on corruption and the fight against same.

It is important to note that the fight against corruption, is an Executive decision, looking at how the Ghanaian constitution has been structured that it is only through the Attorney General, an appointee of the president like any other appointee to the position of a minister that can take up prosecutions of matters of corruption.

This presents us a rather interesting case. Should corruption be seen to be on the ascendancy, and should evidence abound, and the government is without interest in those cases, nothing gets achieved. No issues of corruption would be tried and no one would be incarcerated.

It is not out of nothing that Ghanaians woke up last week, to a rather unfortunate, but unsurprising report by the Transparency International that Ghana ranked the 81st position out of 180 countries surveyed in its attempt to fight corruption, scoring 40% in 2017 as compared to 43% the previous year, recording the worse performance in the last 6 years. It is not out of nothing.

Ghanaians have seen a conscious and acquiesced efforts by the president, to present his appointees as angels who have arrived from a planet other than earth, to man Ministries, Departments and Agencies. He would quickly come between allegations and the accused, and in a speed of light, clear any appointee involved in allegations of corruption. At least, Ghanaians can remember, off their heads, some issues of clear corruption and how it was handled.

One of the first scandals to hit the Akufo-Addo government was the Bulk Oil Storage and Transport (BOST) scandal. In this very case, a whopping 5 million litres of fuel was contaminated in the storage of the company. The Managing Director, without engaging in any competitive tendering to obtain value for money, single-handedly, selected an unregistered company, and without any experience in the discharge of contaminated oil, awarded them the contract to lift the said oil.

When this matter was brought out, the minister in charge of Energy, Mr. Boakye Agyarko claimed to have instituted a committee to investigate the issue. Then, after a couple of days, he appeared in Parliament to claim that the committee had cleared the Managing Director of BOST, Mr. Alfred Obeng of any wrongdoing.

Since that day, some members of Parliament demanded to see minutes of the said committee meetings that cleared Mr. Alfred Obeng of any wrongdoing from the minister. We are yet to sight any such minutes.

Not only that, the same minister, Mr. Boakye Agyarko presented to the people of Ghana, that the Bureau of National Investigations (BNI) had investigated Mr. Alfred Obeng on the same contaminated fuel scandal and cleared him of any wrongdoing. As of today, we are yet to sight any written report from the BNI to that effect.

On top of that the president, having assigned himself the position of a judge over issues bothering on his appointees, cleared Mr. Obeng and BOST of any wrongdoing.

Then comes another multi-million dollar scandal, first among the first of scandals to hit this government. The Finance Minister Ken Ofori-Atta, a cousin of the President of Ghana, issued a bond of $2.25 billion in a record time. It turned out that the bond did not take into consideration, certain requirements. The participants were said to have been dealt with in a manner that some classified as “insider trading”. There was no full disclosure and as established by the Commission on Human Rights and Administrative Justice (CHRAJ) there was “potential conflict of interest” on the matter brought before it.

Long before investigations could be launched into the issue, the president again mounted the clearing throne, and cleared his cousin of any wrongdoing. The matter is pending before the Supreme Court for determination for further determination.

Then come another scandal dubbed “Cash for Seat”. In this very case, the Ministry of Trade and the Presidency of the Republic of Ghana in 2017, have been cited as extorting monies from expatriate business men ranging from $15,000 to $100,000 for a seat near the president, proximity of which is determined by the value paid. This, many considered unacceptable as one could not make demands of the nature from people he seeks to award.

Long before discussions would go into this very matter, the president, once again, mounted the clearing throne, and cleared the Trade Ministry from any wrongdoing.

The matter attracted the interest of the Minority in Parliament to call for a bipartisan investigation into the matter. Parliament (an independent arm of government) was immediate called from recess, a committee was constituted to look into the matter. While the committee was at its work, the president could not be restrained. As a lawyer, who ought to know that a matter pending enquiry, could not be pronounced on, he assumed the clearing throne and cleared the Trade Ministry once again of any wrongdoing.

Then, Ghanaians woke up to another issue of some bizarre Ghc800,000 budged for a Website for the Ministry of Special Development Initiatives. Several commentary went into the matter and informed a quick switch to the position of typographical error. According to the Ministry, they meant to present Ghc80,000. Granted that as the case. Miraculously, the total budget figure, which had the Ghc800,000 as a component, never changed.

It left questions in our minds. “If the said error was to be approved in error by the Parliament of Ghana, would a balance of Ghc720,000 be returned to the people of Ghana?” This matter was never investigated by the government, no interest was shown in same, and here we are today.

Not too long ago, there were news of some Premix fuel diversions at the Ministry of Fisheries. It came out that the gentleman cited in the scandal, was the brother of the Minister in charge of Fisheries, appointed by his sister. This matter had also gone without any attempt from the government to investigate and to arrive at a conclusion.

While the president and his government thought, by the actions of the president in clearing any issues of corruption, they were presenting a team of angels to the people of Ghana, the people have their various and strong opinions which speak otherwise. These individual opinions were those that fed into the Corruption Perception Index released which scored Ghana lowest in the past 6 years in 2017.

To fight corruption, a president must be able to give way to investigative bodies to investigate issues of corruption without any single interest of cover-up. Unfortunately, that is not what we have in Ghana today.

What we have in Ghana today is that the Criminal Investigations Department (and corruption is criminal), which is currently being headed by Maame Yaa Tiwaa Addo Danquah, cannot convince me that there is the will, to independently execute investigations without a clear attempt to shield government officials appointed by His Excellency Nana Akufo-Addo.

This is because, this very woman’s appointment to this position, came at a time when a leaked tape recording had been released into the public domain compromising her position over an investigation on two appointees (two Deputy Chiefs of Staff) of the president at the Flagstaff House.

The said audio recording revealed how she, while on the investigation pending the outcome, coerced the chief witness, one Kwame Asare Obeng also known as Kwame A-Plus, to conduct himself in a manner that would not disgrace the government since according to her, “the people are your people”.

This did not trigger the interest of the government to launch an investigation into this rather dangerous revelation. Rather, she was lifted to the position of acting head of the Criminal Investigations Department of the Ghana Police Service and later confirmed in the said position.

Appointment of family members and friends is a major hindrance in the fight against corruption. It is nearly unthinkable, to process a bother, a sister, a family relation, to court to watch the person walked to prison. The most difficult thing to do in government is to fight corruption. The most difficult fight on this earth is a fight against family members. If a government pack these two social forces into the same boat (government) then we can all assume the difficulties that would arise in any attempt to fight corruption. Cases of corruption would rather be treated as though they do not exist or cannot be proven to have existed.

That over the past week, pending another determination (as I understand Mr. Abuga Pele is appealing the ruling), we can see a clear commitment from the previous government headed by His Excellency John Dramani Mahama as president, to process individual appointees of his government as against what we see today. We have seen interdictions of individuals without any will by the president to clear them.

This is because, the then president, acting in the interest of the people, knew that he appointed human beings and not angels to work with. For that matter, he was ready and willing to deal with allegations of corruption no matter his shortfalls. The case today is that, the president assumes he is an angel and scouted for the best angels from the Ghanaian public and are above any wrongdoing, so he could superintend over any allegation and pass them clean of same.

It would be appropriate to situate the issues within their proper context. It would be completely unthinkable to assume that the success of this case brought before the court, could be credited to the current administration. This issue had been in the courts for the past four years. The audacity to process this matter by the Executive, must go to the credit of the Executive president who defied everything to process his own appointee and Member of Parliament for court. 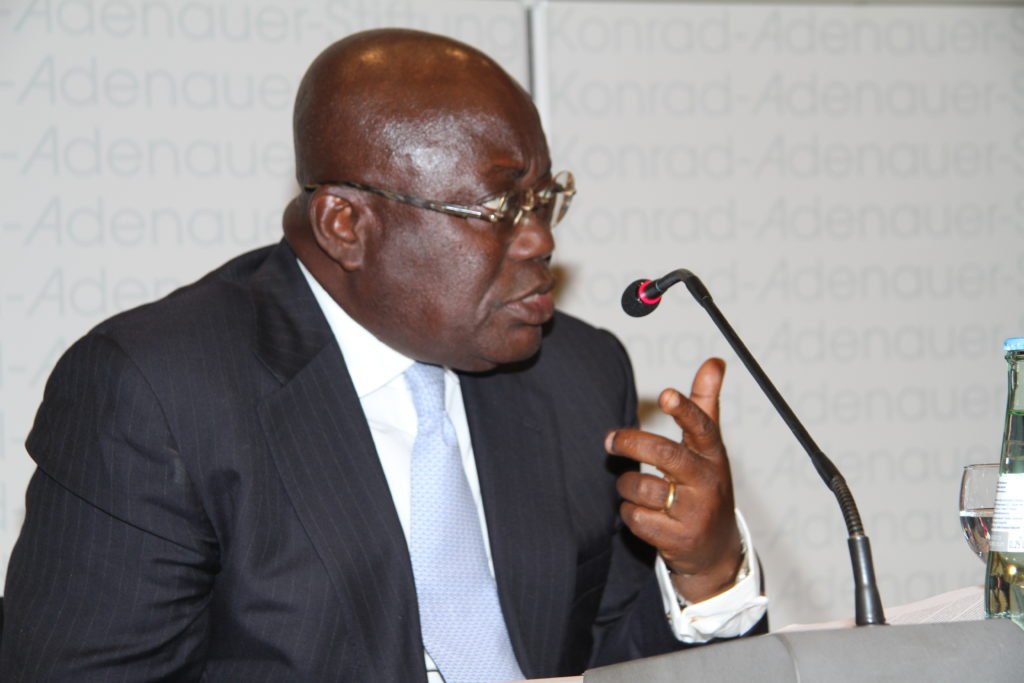 We must begin to see some clear commitments in the fight against corruption. Unfortunately, it may appear a wish to see this happen in the current administration as the bond between the president and his appointees, considering the fact that those in sensitive positions relate to him, would impose on him, an obligation of an ‘abusia panyin’ (family head) as he would treat issues of abuse of state resources as a family matter which ought to be treated home, rather than seeing such as an offense on the generality of Ghanaians warranting a state prosecution. More must be done if we are to see any improvement in our future ratings on corruption from the international community based on their engagements with the ordinary citizens of our beloved country, Ghana.

7 thoughts on “CORRUPTION AND THE FIGHT AGAINST CORRUPTION: HOW FAR GHANA HAS COME IN RECENT TIMES”